A Mexican science professor who studies efforts to deploy technology to identify the missing reacts to Andrea Chapela’s “The Wait.”

If you visit the website of Mexico’s National Registry of Disappeared and Missing Persons, you will see a pop-up window that says the information contained there comes from many different sources, which is why it may contain errors or inaccuracies. According to this real-world registry, there are currently more than 90,000 disappeared and missing persons in the country. (Missing is the category used to report people who can’t be located, while disappeared means there is evidence that they have been taken by force.) But as the notice clearly indicates, these are tentative numbers. Sources and data are constantly being verified; new cases are registered each week.

This registry was created in 2018, and it includes disappearances from all the recent violence associated with the nation’s drug cartel wars. But it also includes cases that date back to the “dirty war” of the 1960s, when repressive governments ruthlessly targeted and eliminated revolutionary groups that had taken up arms against the state and anyone else whom they considered political threats, all under the auspices of U.S. anti-communist foreign policy.

Regrettably, therefore, the setting of Andrea Chapela’s “The Wait”—a short story about a woman waiting indefinitely in a governmental office (the “National Institute of Citizen Registration and Geolocation”) for news about Víctor, her missing brother—is painfully familiar to many people in Mexico. And indeed, much like in “The Wait,” women are mainly the ones who do the inquiring of authorities or actually do the searching, sometimes as members of highly organized search collectives.

What distinguishes Chapela’s setting as fiction is the existence of a full-blown, hypervigilant surveillance state using technology to track all Mexicans in real time. Chapela’s Registry is so much more than its real-life retroactively-searching-for-needles-in-a-haystack analogue. A chip subcutaneously inserted into the wrist allows ubiquitous scanners to pin a person’s every location and generate a permanent log of their activities.

“When was the last time you saw this person?” the Registry clerk asks our protagonist. At this point in the story—as is often the case in interactions with figures of authority in too many countries—we do not know, and the story’s protagonist herself doesn’t know, whether the bureaucrat asking the questions is part of the problem or part of the solution. We do not know if the clerk is feigning ignorance, posing probing questions, or acknowledging an information gap in the system. The story then provides a glimpse of the surveillance system’s genealogy. In an earlier family discussion about privacy, Víctor’s mother laments that her son has missed the point of the Registry:

He didn’t understand what things had been like before, when she was young and had to share her location with her friends, always telling them where she was going, what she was doing, letting everyone know everything because a girl alone couldn’t be trusted not to end up as another number in the statistics of forced disappearances. Long before the Registry, people had made their own social tracking system to protect one another. Privacy had been a luxury—and a vulnerability—that they’d been willing to sacrifice.

This passage brings to mind contemporary discussions in the field of science and technology studies surrounding “technological appropriation.” Technological appropriation is traditionally defined as the process whereby users of a technology adopt and adapt it into their lives, sometimes by recontextualizing and attaching new meanings to these technologies. Chapela describes how, before the Registry, people “made their own social tracking system to protect one another”—perhaps by using the “share live location” feature on WhatsApp that so many of us have leveraged as a personal security system. It’s also similar to the common advice that people, especially young women, keep their mobile phones “findable” in case anything goes wrong.

But users at the periphery of knowledge and tech production also sometimes reinvent technological products and knowledge systems (like the pin in the story). Often, those doing the appropriating are engaging in a form of social criticism or political resistance. In Chapela’s story, Víctor’s mother recalls the 2020s (our current times of rampant disappearance) to explain the activist origin of the chip:

The pin came about as a guarantee of protection, born from the desperation of those same people who’d tried to look out for one another; the same people eager to share their coordinates and create a trail that could be followed so no one would be left unfound.

In Mexico, such calls for action and accountability are plentiful these days. For instance, civil organizations and citizens have recently called for the government to strengthen the National Registry of Disappeared and Missing Persons and establish other data infrastructure capable of aiding in the search process. These include mobile device geolocation systems and databases containing the DNA of both searching families and unidentified remains. The people who voluntarily provide this personal information rarely raise privacy concerns. The very act of demanding a proper registry of disappearances is an act of resistance. A reader aware of Mexico’s humanitarian crisis may be receptive to the idea that “the pin was created as a tool so we could find each other ourselves and keep an eye on the government.”

In ”The Wait,” the missing son-slash-brother argues that the government took advantage of society’s previous attempts to organize informal tracking systems. “The problem,” Víctor says during a flashback, “is that they handed over all that power to the government—and now everyone walks around thinking they’re protected. We’re just making things easier for them.”

In Chapela’s fictional Mexico, the government appropriates civil society’s demands for an omnipresent protective surveillance, leaving its users more vulnerable than before. This is hardly far-fetched, as Mexicans are not unfamiliar with political uses of civil claims. The calls made over the past decade for the proper accounting of missing persons and the answerability of the state were met in 2018, in one of President Andrés Manuel López Obrador’s first political undertakings, with the creation of a new law that includes the existing registry. These are all important developments that take into account people’s cries for accountability, but according to analysts from Data Cívica, the tools created are far from optimal, and not necessarily better than the previous ones. Importantly, there is no practical way to relate the current National Registry of Disappeared and Missing Persons with the registries of unidentified bodies, clandestine mass graves, and forensic data. The tools prop up the current administration as “for the people” and tough on (past) governmental misconduct, but despite the existence of these registries, we may still not know precisely how many disappeared persons there are. All of this makes us question whether information technologies are the silver bullet solution to the crisis.

As Víctor’s sister deals with the possibility of his loss, we cannot help but wonder whether he has realized that hacking the system or altering the pin provides only temporary relief from permanent state surveillance. Perhaps Víctor has found a way not to exchange his liberty for his safety. Rather than putting his tech savvy in the service of slipping the all-seeing eye of the state (just like when he altered his sister’s pin record to keep her out of trouble), Víctor might have executed the ultimate hack: the appropriation of disappearance. But with this form of subversion comes a new form of existence: chronic uncertainty for those left behind to deal with governmental office clerks or authorities. This is not much different from the bureaucratically fraught and politically mediated wait that so many families endure today as they move constantly from one registry to another seeking information about their missing—all the while feeling that they are forever stuck in the same place. Waiting.

Sun Sep 26 , 2021
In his forthcoming book, Andrew Yang sheds light on how close he came to a Biden cabinet position. Yang writes that he pitched the creation of a “Secretary of Technology” position. He also says “some members of Congress” encouraged him to go after commerce secretary. Loading Something is loading. While […] 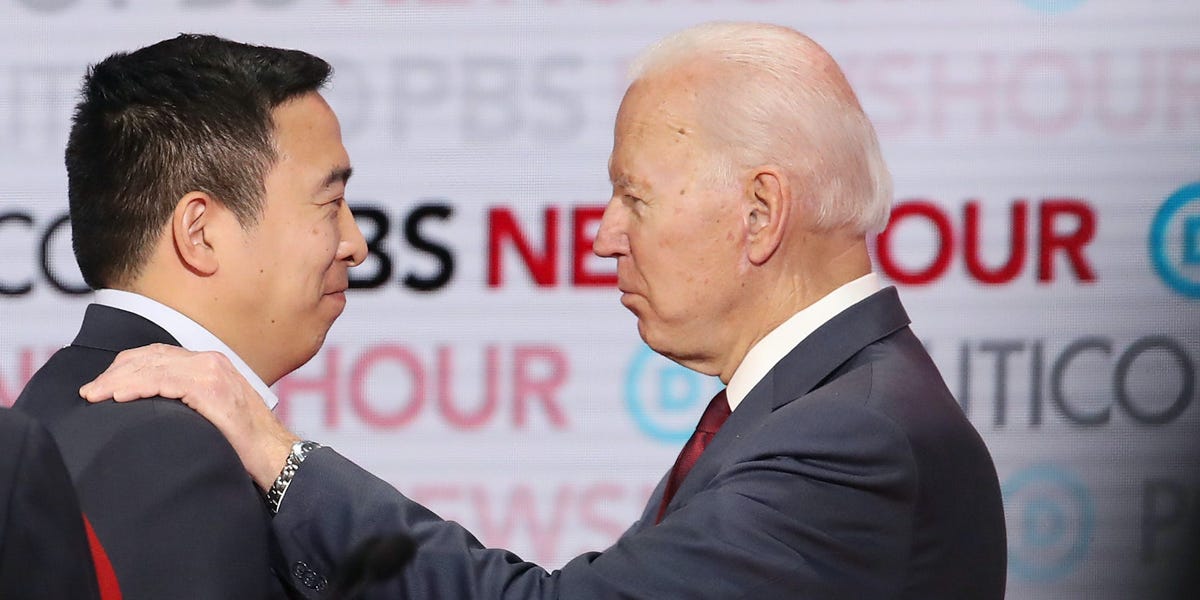