Oct 20 (Reuters) – Nigerian climate activist Goodness Dickson thought being invited to take part in the U.N. climate summit in Scotland meant he would have no trouble attending.

But the high cost of hotels, COVID-19 travel curbs and quarantine rules have left Dickson and other activists from developing countries concerned that their voices will not be heard at the COP26 conference in Glasgow from Oct. 31-Nov. 12.

Reuters spoke with activists in countries including Bangladesh, Pakistan and Uganda. Some had secured funding, visas and vaccines to attend the summit but others gave up.

Dickson is still aiming to get to COP26, where he hopes to tell delegates in person about trying to learn at school when temperatures reached 43°C. He believes developed countries need to hear the personal experiences of those most vulnerable to climate change.

“I’m still looking out for funding,” said the 28-year-old, who represents Nigeria’s Eco Clean Active NGO and estimates his trip would cost over $4,000 including accommodation and quarantine.

“I am worried that the COP will lack representation from the African continent.”

The summit’s British hosts have offered some funding assistance and vaccines for delegates who could not otherwise access them.

“We are working tirelessly with all our partners, including the Scottish government and the U.N., to ensure an inclusive, accessible and safe summit in Glasgow with a comprehensive set of COVID mitigation measures,” a COP26 spokesperson said, adding that government-approved hotel provider MCI had offered delegates a range of fairly-priced accommodation.

The United Kingdom this month scrapped quarantine requirements for 47 countries including South Africa and India, sparing delegates the 2,285 pounds ($3,150) cost of a 10-day hotel quarantine.

Last month, it said it would cover quarantine costs for delegates from countries still on the UK’s COVID-19 travel “red list” – currently seven states including Colombia and Venezuela.

But some would-be delegates say they’ve been unable to access the help, or that it doesn’t go far enough. Others say their own governments should be doing more to ensure they can attend.

“Visas and quarantines have been a nightmare,” said Philippines-based activist Mitzi Jonelle Tan with youth movement Fridays for Future. The youth movement is sending around 55 delegates from regions vulnerable to climate change to COP26, but Tan said others dropped out before the UK revised its quarantine rules.

The UK government is expecting around 25,000 people to attend COP26, but has yet to release a list of delegates.

As of Tuesday, prices for the few hotel rooms still available for the full 12-day conference on Booking.com began at 291 pounds per night, a total of 3,486 pounds.

The cost was enough to deter Ugandan climate justice advocate Nyombi Morris, 23, who had been hoping to highlight campaigners’ concerns about the impact of EU biomass energy policies on forests. He turned down the UK’s accreditation offer because it came without financial support.

Homestay groups have tried to provide more affordable accommodation, but are struggling to meet demand. The Human Hotel network said it had secured beds in local Glasgow homes for about 600 delegates.

“We are aware of several thousand others who wish to come and make their voices heard at COP26, but who cannot afford the astronomical prices of hotels in Scotland,” said the network’s community manager Michael Yule.

For others, health risks and travel headaches caused by the pandemic were reason to skip the event.

“I have not missed a COP since 2010 … this will be the first,” Li Shuo, senior climate adviser at Greenpeace China in Beijing, told Reuters. “I hope the smaller NGO presence will remind everyone that there are voices unrepresented.”

Government delegations without direct travel routes to Glasgow also face logistical challenges. The Cook Islands in the South Pacific will not send a delegation, and other small island nations are struggling to resolve visa issues.

Nobert Nyandire, a climate activist in Nairobi, Kenya received a COVID-19 vaccine this month through the UK government scheme. He will attend COP26 to work on the technical U.N. negotiations for Kenya’s non-profit Sustainable Environmental Development Watch, but said some colleagues are still awaiting vaccines or had been deterred by the cost.

“If the same people who are affected and who actually should be able to participate in such negotiations are not going to attend, then it means that I’m not very sure of the kind of decisions that are going to be made,” Nyandire said.

Sun Oct 24 , 2021
Police said that the BolaWrao 100 is a handheld device about the size of a smartphone which launches a Kevlar cord that wraps around people, immobilizing them. ALCOA, Tenn. — The Alcoa Police Department said that it will start using a new technology that should help keep police safe, while […] 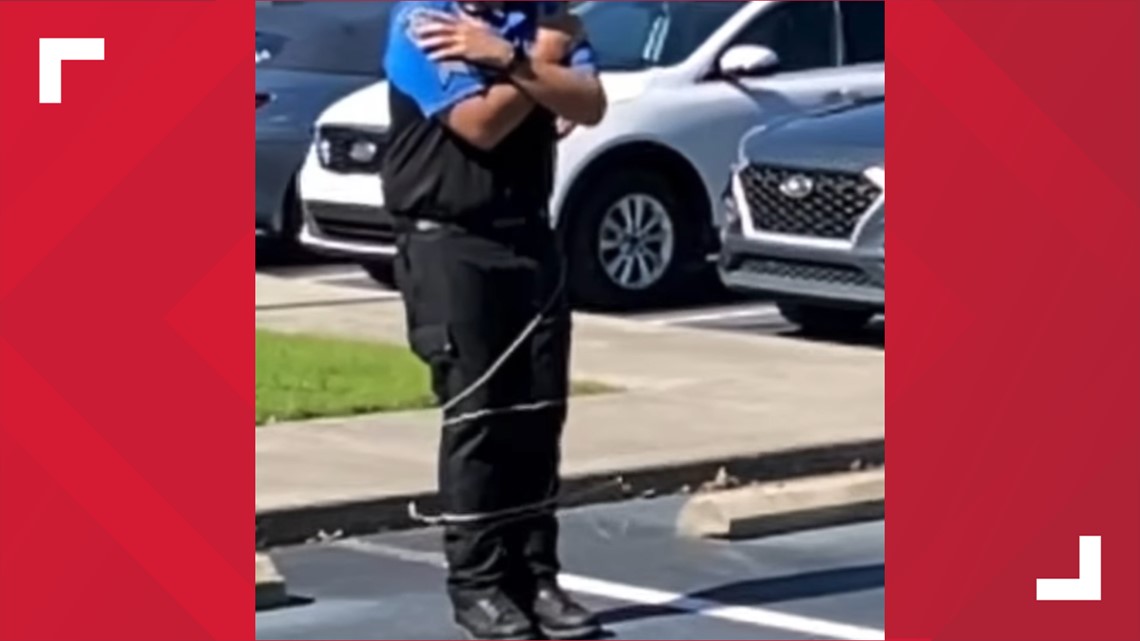