The Senate gaveled back into session last week, while the House is set to return Monday, marking the first time both chambers will be in session since the Omicron variant has fueled a fresh wave in cases around the country. Even before the break, there had been an uptick in infections among lawmakers, staffers and others who work in the Capitol building.

The Office of the Attending Physician said that the percentage of positive Covid-19 tests at the Capitol’s testing center had increased from under 1% to more than 13%, according to a memo sent to congressional offices last week and obtained by CNN. Meanwhile, nearly two dozen lawmakers have publicly announced breakthrough cases over the past month.

“These variant viruses have caused an unprecedented number of cases in the Capitol community affecting hundreds of individuals,” Dr. Brian Monahan, the Capitol’s attending physician, said in the memo. “The daily case rates will increase even more substantially in the coming weeks.”

To address those concerns, Majority Leader Steny Hoyer told members in a letter Friday evening that the House “will be taking steps to lengthen voting times and limit the number of votes taken on the Floor,” essentially returning to protocols that were implemented at the height of the pandemic. Hoyer also reminded lawmakers that masks are required inside the chamber, and asked people to avoid congregating on the floor during votes.

While Speaker Nancy Pelosi has implemented a mask mandate on the House side at the recommendation of the Capitol physician, the Senate — which is a smaller body — has not, and currently has no plans to do so.

That has left Republicans in the Senate divided over whether to wear masks amid the latest surge, with some older members returning to mask wearing after having thought they had turned the page on them months ago.

Sen. Pat Toomey, a Republican from Pennsylvania, said he was wearing a mask because he had immunocompromised family members he was going to see and Sen. Richard Burr, the top Republican on the Health, Education, Labor and Pension Committee that deals directly with public health, told CNN he has been masking since before Christmas because of Omicron.

“I am hoping I am prudent in what I do because I’d like to not get sick or make anybody else sick,” Sen. Richard Shelby, an 87-year-old Republican from Alabama, told CNN. “I think it is just common sense.”

Many Senate Republicans, however, were determined not to wear masks last week, with many of them incorrectly stating there was no scientific evidence that they worked.

The Capitol’s health protocols have long been a point of tension between the two parties. Rep. Marjorie Taylor Greene, the Republican firebrand from Georgia, has racked up tens of thousands of dollars in fines for violating the House’s mask policy.

Asked why he wasn’t wearing a mask, Texas Republican Sen. Ted Cruz told CNN, “Because I am vaccinated and because the administration’s rules have been utterly inconsistent and incoherent and not based on science.”

An effort to curb the virus

To curb the spread of the virus amid the latest wave, the Capitol physician is encouraging congressional offices to adopt a “maximal telework posture,” and limit the number of in-person meetings as much as possible. The OAP has also recommended that people wear KN95 or N95 masks, which are more protective than cloth or surgical masks.

In light of that guidance, congressional offices will now be provided a monthly allotment of 40 K95 masks per month for both their DC and district offices, according to a notice from the Chief Administrative Office obtained by CNN. Previously, offices were provided surgical masks.

Offices can also opt to use their Members’ Representational Allowance to purchase additional masks, as well as hand sanitizer, cleaning supplies, disposable gloves and thermometers, according to direction given by the House Administration Committee.

There’s also been discussion of providing congressional offices with at-home rapid tests, though nothing has been officially announced or rolled out yet, according to sources familiar with the talks.

Some offices have already heeded the advice to shift to telework. Some Democratic offices have pushed their return-to-work plans in light of the OAP guidance. Senate Democrats held virtual lunch meetings last week, though Senate Republicans continued to hold in-person party gatherings. House Democrats will continue to hold hybrid caucus meetings this week, with the option to either attend in-person or on Zoom. K95 masks will be required for attendees, according to an invite obtained by CNN. And the House Rules Committee is slated to meet virtually on Monday.

But each congressional office operates as its own fiefdom and sets its own policies, so they are in no way required to adopt the OAP guidance — an all-too-familiar challenge for the ongoing efforts to combat the virus in the halls of Congress.

There have been other new pandemic protocols popping up in the Capitol. The Dunkin’ Donuts in the Longworth House Office Building is now requiring customers to place orders using an app in effort to limit in-person interactions with its workers. Meanwhile, the Capitol’s testing site has moved to a larger location in an effort to expand its testing capacity.

It’s unclear whether Congress will need to pass another Covid relief package. While there have been some preliminary talks on Capitol Hill, the White House has not yet formally called on Congress to provide more funding. Current government funding expires in mid-February.

“Now, the administration has not made a formal request for more funding, but it is clear from the opportunity that is there and again, the challenge that is there, from the resilience of this virus,” Pelosi told CBS’ Margaret Brennan on “Face the Nation” Sunday.

The stepped-up efforts to limit the spread of coronavirus in the halls of Congress comes as other pandemic-related protocols had grown more relaxed in recent months: the Capitol had just started allowing public tours to resume, while larger scrums of reporters have flooded the hallways on busy days. Meanwhile, the District of Columbia had recently lifted its indoor mask mandate, only to reinstate the policy amid the new wave of cases.

It’s too early to tell whether social distancing will be needed for the State of the Union, which is scheduled for March 1 — a later date than usual. Strict measures were in place for President Joe Biden’s first address to Congress last year, which can be a logistical challenge.

The House’s proxy voting system, another tool Pelosi has used to protect members and staffers, has been extended until next month, but many lawmakers expect the mechanism to remain in place for the remainder of this Congress.

While lawmakers on both sides of the aisle have abused the system for non-health reasons, it has also proven a useful tool for those unable to be in Washington because of the pandemic — even among some lawmakers who had been fiercely resistant to proxy voting.

Rep. Bill Posey — a Florida Republican who has spread vaccine misinformation and sharply criticized proxy voting — started using the House’s proxy voting system for several weeks late last year, telling his GOP colleagues it’s because he contracted coronavirus, according to multiple GOP sources with direct knowledge of the situation. Posey’s office did not return a request for comment about his health and vaccine status.

And Rep. Michael McCaul of Texas, the Republican on the House Foreign Affairs Committee, announced Friday that he had a breakthrough case and would be voting by proxy this week as he recovers.

“I tested positive for COVID-19 this week and as a result will be voting by proxy next week for my health and the safety of others. I am fully vaccinated and boosted,” McCaul tweeted. “Thankfully, I am recovering each day. I look forward to returning back to work for the people of TX-10.”

Most of the positive cases identified at the Capitol are breakthrough infections among vaccinated individuals and have not “led to hospitalizations, serious complications, or deaths, attesting to the value of coronavirus vaccinations,” according to the OAP. So far, booster vaccinations have been administered to over 7,500 Capitol Hill employees.

While every single Democrat has told CNN they are immunized, the vaccination status of Republicans is murkier, with some refusing to reveal whether they have received the shot.

Sen. Ron Johnson, a Wisconsin Republican who has not worn a mask for months and has publicly said as of this summer, he was not vaccinated, told CNN, “Masks are by and large useless if you are healthy.”

Pushed on how he knew he was healthy, he said, “I feel great.” He said he doesn’t take a daily Covid test.

“Show me the science where these masks work,” Johnson said.

CLARIFICATION: This story has been updated to clarify the description of the House’s proxy voting system.

Fri Jan 14 , 2022
Jan 12 (Reuters) – As COVID-19 cases surge in the United States, businesses say they fear a California court ruling has increased the likelihood that companies will be sued for infections, even by people who are not employees or customers. The Dec. 21 ruling allowed a wrongful death lawsuit to […] 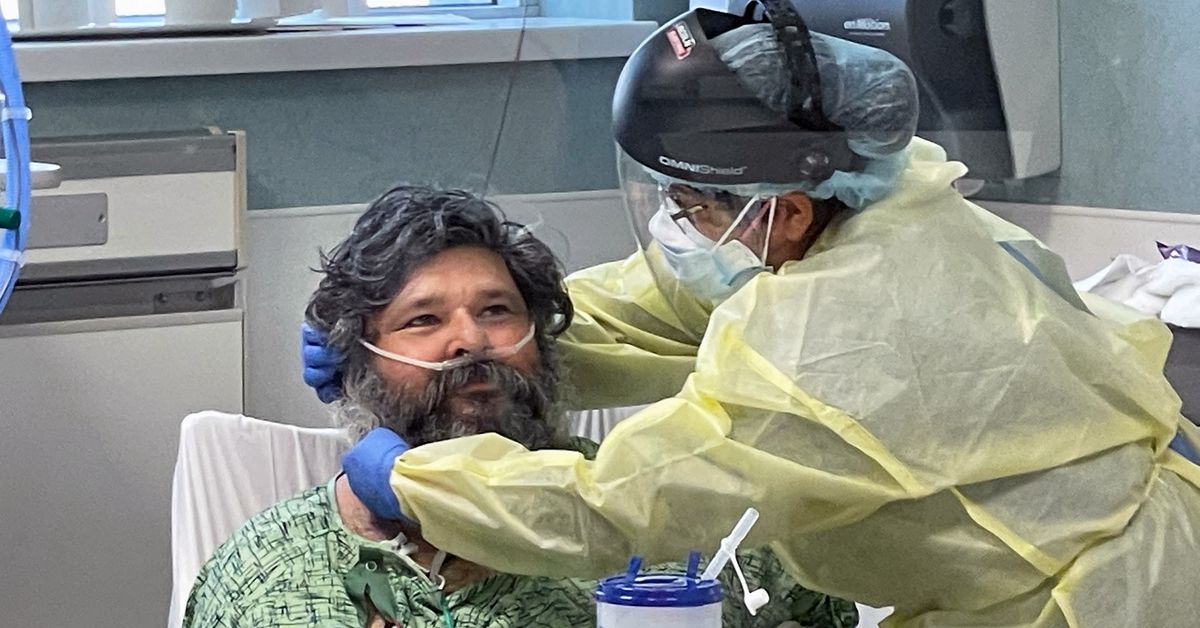