The seven-novel sequence, nearly 800 pages, is narrated in a stream of consciousness with no sentence breaks, and the namesake-doppelgänger story line is never definitively established as an extended speculative exercise or an astounding coincidence (or taciturn act of autofiction). Each novel begins, midthought, the same way, with Asle reflecting on how to finish his painting of the St. Andrew cross; each one ends the same way, mid-Latin prayer, at least until something else happens in the final book. Nevertheless, Asle is a recognizable type, recalling the main figures of Marilynne Robinson’s “Gilead” and Paul Harding’s “Tinkers,” T. S. Eliot’s “Gerontion” and Samuel Beckett’s “Krapp’s Last Tape”: old men surveying their lives, balancing immediate-feeling questions about mortality with intense, incomplete and ambivalent memories of past events and people, and also the heightened demands of everyday life near its end. This is Asle when he’s remembering childhood experiences like lying to his mother about where he got a handful of krone coins; playing on a rocky beach with his sister; seeing his grandfather’s boots shining in the rain; going to art school against his skeptical parents’ wishes; meeting his future wife, Ales; leaving the Church of Norway; becoming a Catholic; and likewise when he’s worrying, as an elderly person, about whether to drive in bad weather; whether he knows someone’s name in a pub; whether to walk the dog in a snowstorm; whether to sell or store a painting; whether to accept an invitation to Christmas dinner.

Whatever Asle’s minor encounters and fragmented memories mean on their own, these are ultimately secondary to his detailing an intense, unbroken feeling of connectedness to God. In this way, Asle is not like Gerontion and the rest: He wants “to comprehend the incomprehensible” about his life, about life itself and about God. Moreover, unlike, say, the equivalent desire and quest in Dante’s “Paradiso,” there’s no epic otherworldly journey leading up to a symphony of magisterial-metaphysical ecstasy. In fact, there’s really not much movement, outwardly or inwardly, at all. Asle is, more or less, already there — knowing and feeling known by God. This sense, in turn, irradiates his thoughts and feelings about the vocation and work of an artist, and likewise about what it means for a believer to respond to the felt presence of God in his life — even with a brashly uncultured, nonbelieving fisherman coming by to needle him for painting a weird picture over and over and going to church too much.

The repetitiveness of the novel’s opening and closing conceits, the paucity of conventional events and the stream-of-consciousness narrating for hundreds of sentence-free pages are, together, finally less provocative than the intactness of the protagonist’s conviction, to paraphrase the opening of John’s Gospel, that the world is a dark place, that a divine light shines through this darkness, and that the darkness does not overcome it. Amid bouts of depression and doubt, Asle deeply believes this, and wants to convey it in his painting:

“It’s always, always the darkest part of the picture that shines the most, and I think that that might be because it’s in the hopelessness and despair, in the darkness, that God is closest to us, but how it happens, how the light I get clearly into the picture gets there, that I don’t know, and how it comes to be at all, that I don’t understand, but I do think that it’s nice to think that maybe it came about like this, that it came to be when an illegitimate child, as they put it, was born in a barn on a winter’s day, on Christmas in fact, and a star up above sent its strong clear light down to earth, a light from God, yes it’s a beautiful thought, I think, because the very word God says that God is real, I think, the mere fact that we have the word and idea God means that God is real, I think, whatever the truth of it is it’s at least a thought that it’s possible to think, it’s that too, even if it’s no more than that, but it’s definitely true that it’s just when things are darkest, blackest, that you see the light, that’s when this light can be seen, when the darkness is shining, yes, and it has always been like that in my life at least, when it’s darkest is when the light appears, when the darkness starts to shine, and maybe it’s the same way in the pictures I paint, anyway I hope it is.”

In a later volume, reflecting on the darkness of art and life alike, Asle observes that “a picture’s not done until there’s light in it.” This is a hope that Caravaggio no doubt would have recognized, and is also, in brilliant, subtle ways, Fosse’s preparation for the end of “Septology” itself.

It’s only in the final pair of novels, now appearing in English under the title “A New Name,” that Asle stops painting the brown line and the purple line. He accepts that these efforts, in art and in his relationships with others and with God, matter only insofar as they create the space for an in-breaking of light and a presence not his own. Feeling weak and lying down in a stranger’s spare bedroom before dinner, Asle prays as he has at the end of each preceding novel. Only this time, he is decisively interrupted: “I breathe slowly in and out and I move my thumb and finger up to the third bead and I say to myself Ave Maria Gratia plena Dominus … and I a ball of blue light shoots into my forehead and bursts and I say reeling inside myself Ora pro nobis peccatoribus nunc et in hora.” “Septology” ends with a portrait of a person’s life now completed by — because of — light that has entered it. In turn, Fosse leaves the final earthly sentence open to who and what comes next.

Tue Feb 22 , 2022
Spotify’s exclusivity deal with “The Joe Rogan Experience” was initially valued at $100 million. But the streamer actually paid Rogan double what was reported, sources told The New York Times.  That brings the podcaster’s total payday to $200 million over three and a half years. Loading Something is loading. Spotify […] 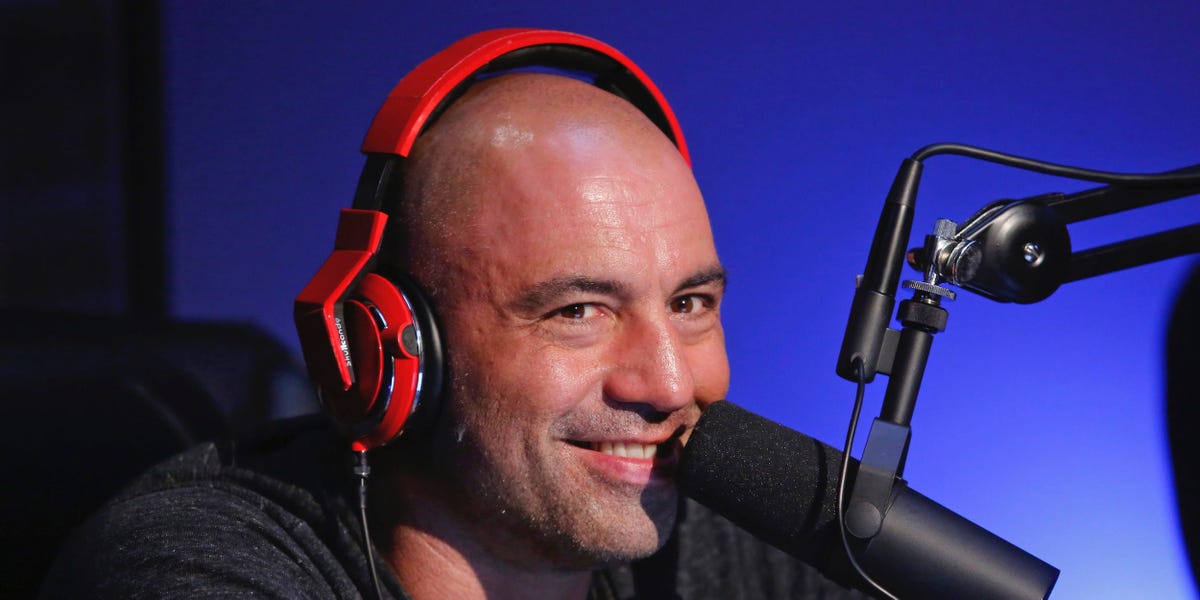