Elon Musk has never been accused of dreaming small. He has reinvented at least two industries with Tesla, his electronic vehicle company, and SpaceX, the rocket company — and now his ambitions are carrying over to his $44 billion acquisition of Twitter.

Mr. Musk, the world’s richest man, has presented a pitch deck to investors in recent days outlining his grand — some might say incredible — plans for Twitter and its financial targets. The New York Times obtained the presentation. Here’s a peek into what Mr. Musk sees for the social media service in the years ahead.

In his pitch deck, Mr. Musk claimed he would increase Twitter’s annual revenue to $26.4 billion by 2028, up from $5 billion last year.

Cut Twitter’s reliance on advertising to less than 50 percent of revenue.

Under Mr. Musk, advertising would fall to 45 percent of total revenue, down from around 90 percent in 2020. In 2028, advertising would generate $12 billion in revenue and subscriptions nearly $10 billion, according to the document. Other revenue would come from businesses such as data licensing.

Produce $15 million in revenue from a payments business.

Twitter would bring in $15 million from a payments business in 2023, according to the document, which would grow to about $1.3 billion by 2028. The company’s payments business today, which includes tipping and shopping, is negligible. There has been speculation that Mr. Musk may introduce payment abilities to Twitter given that he helped popularize PayPal, the digital payments service.

Increase average revenue per user by $5.39.

With all of these changes, Mr. Musk anticipates he can lift Twitter’s average revenue per user — a key metric for social media companies — to $30.22 in 2028 from $24.83 last year, according to the document.

Mr. Musk anticipates Twitter’s total number of users will grow from 217 million at the end of last year to nearly 600 million in 2025 and 931 million six years from now. Most of that growth will come from Twitter’s ad-supported business, including Twitter Blue, for which users pay $3 a month to customize their experience on the app. According to the pitch deck, Mr. Musk expects 69 million users of Twitter Blue by 2025 and 159 million in 2028.

Included in Mr. Musk’s total user estimates are what appear to be subscribers to a new product called X, which would have 104 million users in 2028, according to the document. The document did not detail what X Subscribers was, but Mr. Musk has hinted at introducing an ad-free experience on Twitter. The X Subscribers product shows up on the pitch deck in 2023, with nine million users expected in its first year.

But in between, Mr. Musk expects the number to fluctuate, rising to 9,225 employees in 2022, then declining to 8,332 in 2023 before increasing again. Mr. Musk is likely to shed workers as part of his takeover, before bringing on new talent in engineering, a person with knowledge of the situation said. Stock-based compensation costs are also expected to rise to just over $3 billion by 2028, from $914 million in 2022.

Twitter will add about $13 billion of debt as part of Mr. Musk’s buyout plan. But he expects to pay that debt down as free cash flow — a measure of how much money a company has to service its debt — is set to grow to $3.2 billion in 2025 and $9.4 billion in 2028, according to the pitch deck. Free cash flow would rise even as operating expenses and costs also rose, according to the document.

Tue May 10 , 2022
By SCOTT MCKIE B.P. One Feather Staff   A member of the Eastern Band of Cherokee Indians has brought an Indigenous viewpoint to an art installation in Brooklyn.  Isabella Saunooke, a sophomore seeking a Bachelor of Fine Arts degree in painting with a minor in philosophy from the Pratt […] 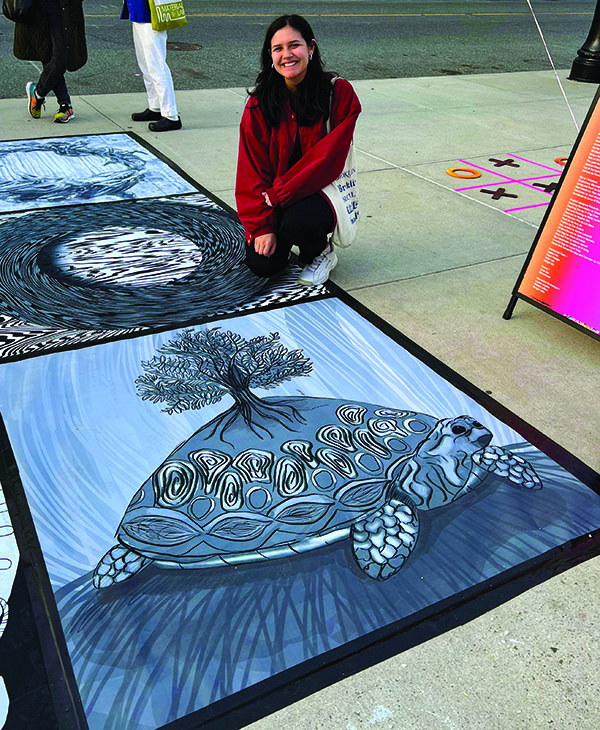