The Parrish Art Museum Board of Trustees has announced the appointment of Melanie Crader as the museum’s new deputy director effective February 22, 2022. Crader fills the vacant spot left by former Deputy Director Chris Siefert, who also held the role of interim director when he filled the vacancy left by longtime Executive Director Terrie Sultan who announced her resignation in May of 2020 and departed that June.

The new deputy director steps in shortly after Sultan’s full-time replacement, Executive Director Kelly Taxter, announced her resignation in December 2021 after just nine months in the position. Taxter took over for Sultan as director, and Seifert as interim director, in March of last year. Seifert meanwhile moved on and joined Bay Street Theater as deputy director last spring.

Parrish is actively seeking a new executive director and has not named an interim director.

As deputy director, Crader joins the Parrish with 14 years of professional experience at arts institutions including the Hammer Museum and the Menil Collection, plus eight years in the financial sector. “…she bridges creative, financial, and operational areas through her expertise in the curatorial process, finance administration, risk analysis, education, human resources, public engagement, and public safety and security,” the museum points out in Monday’s announcement.

“I’m excited to join the Parrish Art Museum for many reasons,” Crader says. “First and foremost, I’m drawn to the thoughtful integration of art, architecture and landscape, and the potential that brings for connections between the community and the museum. I also look forward to immersing myself in a region that continues its long history as a haven for artists. My family and I are excited to embark on our new life, and I’m thrilled to be part of the next chapter of this important institution.”

Parrish Board President Mary E. Frank adds, “We welcome Melanie at a critical juncture for the Parrish. Since first meeting with her this past fall, we knew that her creative nature would combine with her leadership and management skills to ensure that the Parrish continues to provide the top-quality exhibitions and programming for which the museum is known.”

For the past eight years, Crader served as Director of Exhibitions and Publication Management at the Hammer Museum, UCLA, Los Angeles, where she was responsible for financial and administrative oversight of all curatorial initiatives, exhibitions and publications. Managing the institution’s exhibition program, she collaborated with local, national, and international institutional partners including The Metropolitan Museum of Art, Museum of Modern Art, Whitney Museum of American Art, Brooklyn Museum, MCA Chicago, Walker Art Center, Stedelijk Museum, and Pinacoteca de São Paulo.

Crader provided financial and administrative oversight of several museum departments, managed a publications program, and developed a long-range exhibition and publication budget, among other achievements. She actively participated in key committees including Senior Staff, Digital Strategy, Staff Engagement, Diversity and Inclusion, and most recently the COVID-19 Task Force focused on the re-opening the museum.

During her six years at the Menil Collection in Houston, Crader managed the operating budget and exhibition program, led a variety of special projects including institutional publications, oversaw major digital infrastructure initiatives, and implemented long-term budget planning for building projects and a capital campaign. Before entering the non-profit sector, she worked in the marketing and communications department at an international investment company.

An artist and educator who taught at the university level, Crader holds an MFA from Ohio University, Athens, and a BA from McNeese State University, Lake Charles, LA. She also attended the Banco Santander W30 Program, and UCLA Anderson School of Management. Crader is a member of the International Exhibition Organizers, and has been actively involved for 10 years with the North American Exhibition Organizers (AEO) as both a member and serving on the Steering Committee since 2017. For several years, she sat on the Board of Directors and was an Artist Board Member of DiverseWorks Art Space, Houston.

Thu Jan 13 , 2022
Over two-thirds of LGBTQ youth said recent debates over state laws that target transgender people have negatively impacted their mental health, a new poll released Monday by the Trevor Project shows. Why it matters: 2021 saw a record number of anti-trans bills introduced in state legislatures — many specifically focused […] 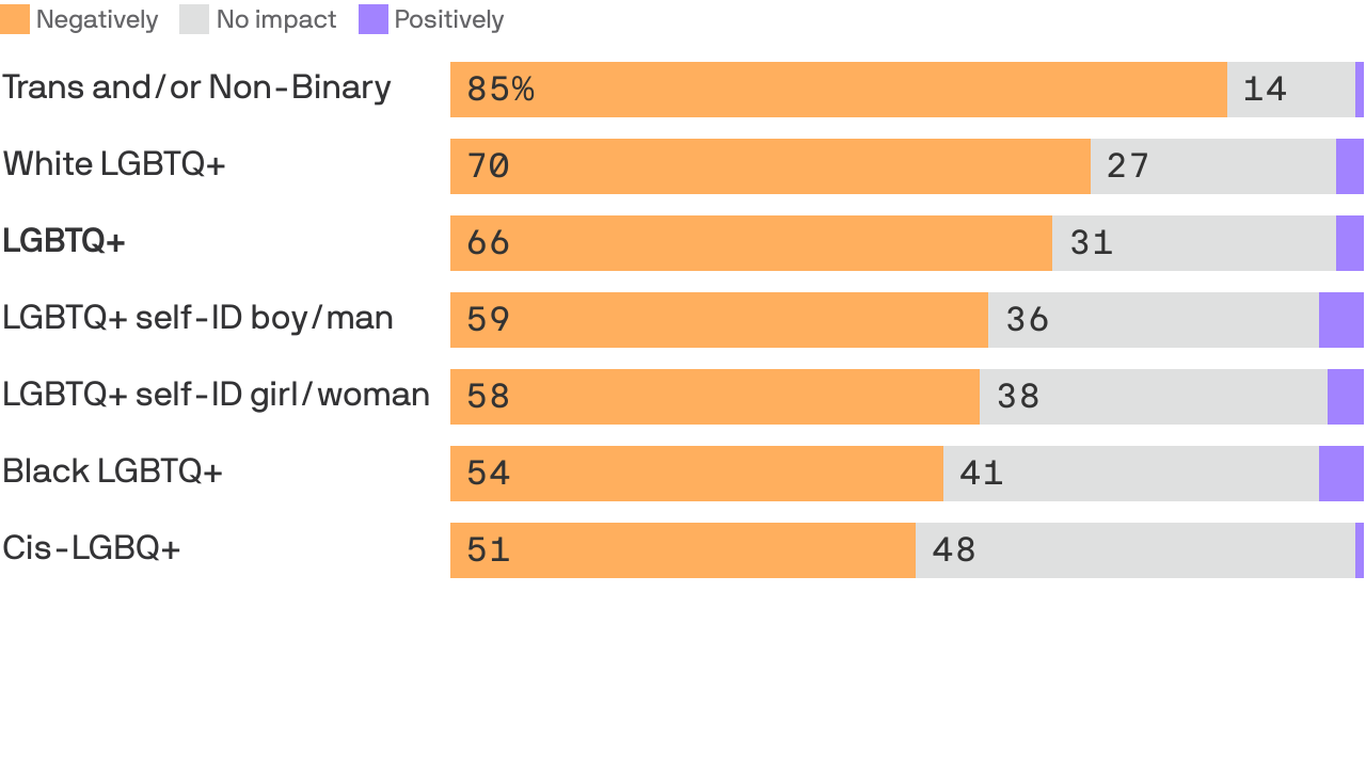