In an interview, Himelfarb, a practicing emergency physician, told the Globe she wrote the letter to spur the state to more drastic action than it has taken so far. The letter serves as a sobering warning to a pandemic-weary public about the scale of a towering crisis.

Nearly two years from the start of the COVID-19 pandemic, emergency departments around Rhode Island are severely understaffed, with some reporting 25 to 50 percent of their nursing positions unfilled. Hospitals are also dealing with shortages of unit secretaries, lab techs, and radiology techs. COVID-19 vaccine requirements did not cause any major hospital system to lose a significant amount of staff, Himelfarb said.

People are leaving emergency department jobs for complex reasons, including burnout after two pandemic years and low pay even compared to neighboring states. Some nurses have left for lucrative travel jobs that they can do while still living in Rhode Island, or for other specialties where they won’t suffer from the moral injury of working in a traumatic, dysfunctional system.

COVID-19 cases, although they have risen recently, are not the immediate cause of the capacity crisis, Himelfarb said. The system is simply too short-staffed to deal with the sort of volume it could have handled in the past. But any further COVID surges would be “unmanageable.” Hospitals don’t even have enough staff for themselves, much less to open field hospitals like the state did last year.

The crisis has led to long wait times and inconsistent standards of care: “rationing resources, unable to provide privacy, and certainly unable to provide any COVID-19 isolation precautions,” Himelfarb wrote. It doesn’t happen all the time, but hospitals now are unable to consistently provide the level of care people are accustomed to in 21st century America.

“Imagine patients dying while waiting to be seen by a doctor who is 50 feet away and, because of lack of staff and thus capacity, simply unable to treat them,” Himelfarb wrote. “This is a true tragedy that is currently unfolding for citizens of Rhode Island.”

She told the Globe: “No one who is practicing medicine alive in this country right now has ever experienced what we’re going through right now.”

Himelfarb in her Tuesday letter called on the state to implement a mask mandate — it did so Wednesday, although as she noted, it only went into effect on Monday — and to impose limits on elective procedures. She also said the National Guard and Disaster Medical Assistance Teams could help. The state could also provide subsidies for health care worker salaries to get them to come to Rhode Island; loosen licensing and credentialing criteria and let professionals work there if they’re licensed in another state; and provide protection from legal liability when they’re working in these sorts of “disaster conditions.”

But there are no easy solutions to a staffing problem that predates even the coronavirus pandemic in Rhode Island, problems that can be traced to comparatively low Medicaid reimbursements in Rhode Island and “business priorities of the individual medical systems.” Like a chronic disease that turns into a dire medical emergency, this chronic problem is leading to system-wide failure in Rhode Island, she said.

She added in her letter: “The lack of policy and action from the [Rhode Island Department of Health] and state leadership to address this health care capacity crisis are putting our citizens at risk.”

Himelfarb said the steps taken since the letter “have not yet come to fruition.”

The Lifespan system has said it’s canceling some elective procedures, but there has been no statewide mandate in Rhode Island, unlike in Massachusetts.

People should continue to seek care at an emergency department for emergencies, but try other routes for non-emergencies, keeping in mind that “we are in a very tenuous place right now,” Himelfarb said. They should also get vaccines and boosters, and wear masks indoors.

“Everybody needs to do their part,” Himelfarb said.

She said that Governor Dan McKee’s office and the Health Department have not yet responded directly to her letter.

Her account lines up with what emergency doctors and nurses have been warning for weeks, warnings that have only escalated recently: People are suffering and dying because they can’t get the care they need when they need it.

Confidential internal Department of Health documents obtained by the Globe revealed that the state’s busiest emergency departments are considered “dangerously overcrowded.” The health care system uses a score called NEDOCS to measure overcrowding, from a scale that goes up to 200. Several hospitals have been consistently at 200, and the state’s largest, Rhode Island Hospital, was most recently at 198. Anything over 180 is considered “dangerously overcrowded.”

The crisis is playing out not just in emergency departments, but across the health care system, which is suffering from a lack of everything from ambulance crews to nursing home staff. Emergency departments, though, are considered the front door of a hospital. It’s where crises often come first.

“We are, one could say, the canary in the coal mine of health care,” Himelfarb wrote, “and our state health care system is currently collapsing.”

Sun Dec 26 , 2021
Manchin “refused to take a call from White House staff” before his Build Back Better announcement, per Politico. Less than half an hour before his Fox News interview, Manchin told an aide to call the White House. Biden officials tried to intercept Manchin but were unsuccessful, according to the report. […] 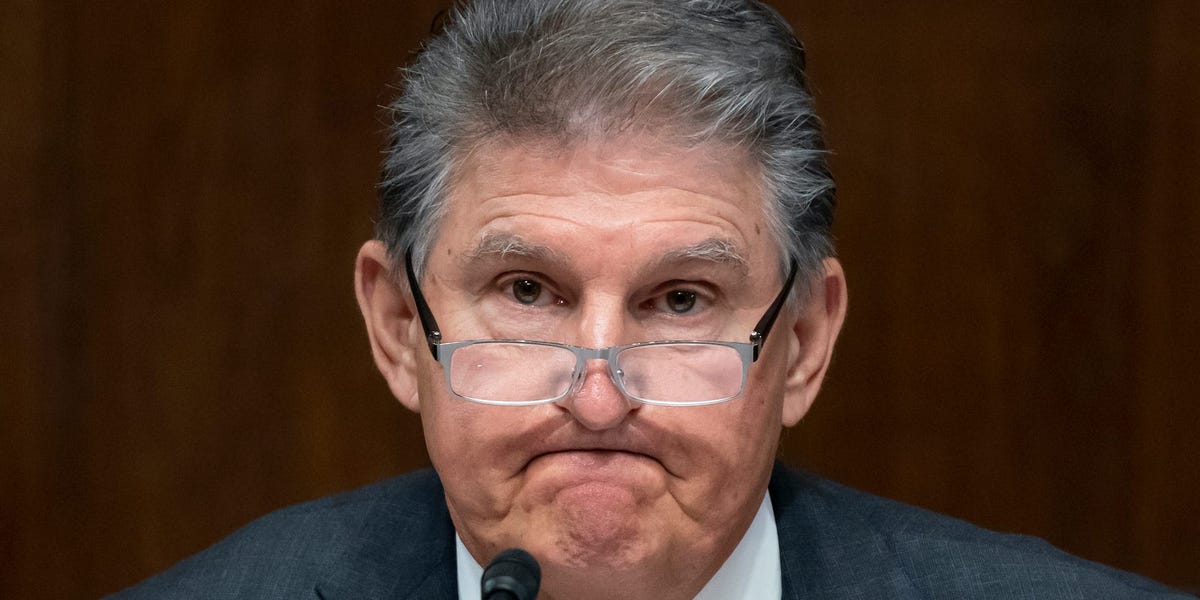