The 2021 Mercedes-Benz S-Class comes with enough infotainment to entertain the most tech-obsessed passengers.

Its OLED touchscreens span the dashboard like a pixelated surfboard, its heads-up camera is displayed in big-screen augmented reality, its on-board wellness systems surpass the serenity levels of several local spas I’ve visited here in Los Angeles — all factors in why it ranks as the best car I drove in 2021.

But many people who buy Mercedes’ $110,000 technological wonder won’t fully tap into the car’s advanced capabilities. Fewer than half of those who bought new cars this year will use all of the advanced technologies available in them during the first three months of driving it, according to J.D. Power’s 2021 Tech Experience Index. More than 60% will never use them, the index predicts.

“New-vehicle prices are at an all-time high, partly as a result of an increased level of content,” Kristin Kolodge, J.D. Power’s executive director of human machine interface, said in the report. “This is fine if owners are getting value for their money, but some features seem like a waste to many owners.”

Progress is healthy and vital for the auto industry. This year has been full of it. And new research shows it’s safer to use such new things as voice-activated technologies than touchscreens, which can distract drivers.

But some consumers, it seems, are not quite as excited as automakers hoped about the more intrusive safety technologies, mega-sized infotainment screens, auto-dimming mirrors, branded puddle lamps, haptic-feedback touchscreens, progressive driving assistants, and AI systems these new cars offer.

Instead of eliminating distraction, some of these new technologies create it — and driver distraction is estimated to be a factor in up to 30% of car collisions and nearly 60% of teen crashes.

In 2021, I reviewed dozens of new cars. Here are the most annoying technologies I found in them.

Everyone who has driven a sports car as it is meant to be driven — quickly, efficiently, smoothly, thrillingly — will be able to commiserate with this one: momentary resistance from the steering wheel when you try to make a last-minute lane change. The stay-in-lane safety tech can feel discombobulating at best, distracting at worst. I have felt my heart jump more than a few times when trying to change lanes quickly and, for an instant, the steering wheel won’t comply.

General Motors’ Cadillac Escalade, Infiniti’s QX 55, and Mercedes-Benz’s AMG GT 63 S all offer lane-change assist programs, but nanny systems meant as crash avoidance often prove more annoying than helpful. (It helps to, uh, use your indicators, which often disengage the system for the duration of the lane change.)

Some of us like to talk with our hands. Some of us really talk with them when we care a lot about what we’re talking about. This is an issue in such cars as BMW’s iX SUV and i4 sedan, which offer the gesture control feature. I’ll be driving along, innocently making a point — and unwittingly turning up the volume on the radio. Nope! Wrong move.

How many times have you been in the middle of conversing with a friend in the passenger seat and the car interrupts? “I couldn’t quite understand; can you repeat that?” I wasn’t talking to the car in the first place!

Then there’s the other side of this: When you want the car to do something and verbally instruct it, but it doesn’t “hear” you correctly: “Call Aunt Barb” becomes “Calling Anthony.” Ugh!.

This is nothing new. Automakers from Mazda and Ford to Genesis with its GV80 — and Aston Martin, in the new DBX — have been offering it. And they’re getting close: Speech-recognition technologies are becoming de rigueur, even allowing speech-activated web browsing and app use. But they have yet to get it to operate at the levels we know and trust in Android phones or iPhones.

This is less a gripe about technology and more one regarding design: those pillbox-sized shifters that Audi and Porsche have respectively taken to installing in such cars as the eTron GT and Taycan. (It stands to reason that these brands are doing it because they are both owned by Volkswagen.) They look ridiculous.

More important, they require an extra step to put the car in park when you wish to exit, since you must push the P button to stop the car from potentially rolling in the default Neutral setting. It was one thing to take away the manual transmission and gear shifts; did the engineers have to add insult to injury with these barely there shifters, too?

The simple technology that fully opens or closes a car window with one touch of a button can annoy, just like that mosquito that won’t quit buzzing in your ear. If you leave your finger on the button an instant too long, rather than set your window half-open or cracked just at the top, you’ve sent it barreling down to wide open or fully up to completely closed. Lots of luxury cars offer this vexing prospect — even the excellent Mercedes-Benz EQS.

From paint to plaster, everything in between, find a DIY class nearby

Fri Dec 31 , 2021
CITY OF NEWBURGH – Watching video tutorials or looking up home repair tips online doesn’t quite cut it for Sebastien Aubert. “I like to learn from people. They tell you about their own experience,” Aubert said. “And it’s cool that they’re willing to share. I appreciate that.” Aubert is a French […] 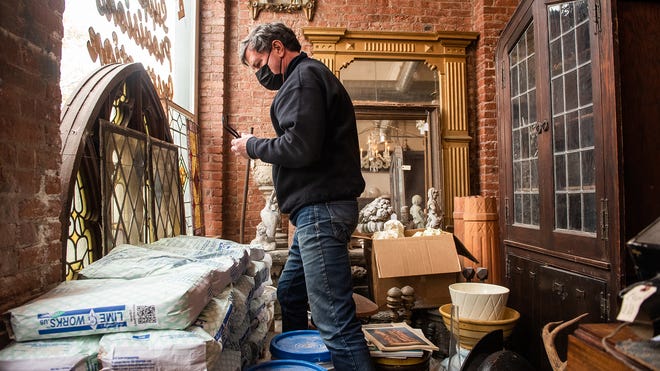