In the opening pages of Ben Lerner’s debut novel, “Leaving the Atocha Station,” his narrator goes to Madrid’s Prado museum and observes a stranger breaking into sobs in front of Rogier van der Weyden’s “Descent From the Cross,” a votive portrait attributed to Paolo da San Leocadio, and Hieronymus Bosch’s “Garden […]

In the opening pages of Ben Lerner’s debut novel, “Leaving the Atocha Station,” his narrator goes to Madrid’s Prado museum and observes a stranger breaking into sobs in front of Rogier van der Weyden’s “Descent From the Cross,” a votive portrait attributed to Paolo da San Leocadio, and Hieronymus Bosch’s “Garden of Earthly Delights.” He watches the man until he leaves and follows him out into the sunshine. The narrator has worried for a long time that he is incapable of having such a profound experience of art. Many of us, I imagine, have experienced the failure to be moved by a painting as we’d hoped to be. I thought of this passage as I watched the first major ad for Meta, Facebook’s rebranding as a metaverse company, which also takes place in a museum. But here the art is moving — quite literally.

The video begins with four young people looking at Henri Rousseau’s “Fight Between a Tiger and a Buffalo,” which hangs in the Cleveland Museum of Art. As they peer into the frame, the tiger’s eyes flicker and the whole painting comes to life and opens up into a three-dimensional animated jungle. The tiger and the buffalo, the toucans and monkeys and the mandrills in the trees, all start dancing to an old rave tune; the kids bop along, too. Fruit trees grow around them in the gallery. Above the rainforest canopy, in the distance, stands a mysterious hexagonal portal, and beyond that, in the misty red hills, the towering skyline of a great tropical city. It’s a scene that suggests Facebook may be returning to Silicon Valley’s countercultural origins: a psychedelic dream of a global community sharing in collective hallucinations.

The video keynote that Meta released to explain itself to investors also features art prominently, opening with a demo in which a couple of Mark Zuckerberg’s co-workers find a piece of augmented-reality street art hidden on a wall in SoHo. It’s brought to life by 3-D animation and ported over from Lower Manhattan to virtual reality, growing into a nightmarish Cthulhu-like blob that surrounds their avatars. (Zuckerberg: “That’s awesome!”) For some reason, the company wants us to think about art when we think about its new product. Perhaps it’s because they want us to see it as a platform for creative self-expression — or perhaps just because fine art provides a more edifying context than video games or working from home.

This apparent stance toward art is at once moronic and apt; moronic because it reduces art to a mere gewgaw, apt because other entrepreneurs have already embraced this view. The animated Rousseau assumes the popular logic of the “Van Gogh immersive experience,” in which the dour old Dutchman’s paintings of starry nights and ominous wheat fields are projected onto the walls and floors to create an enveloping spectacle, attraction and selfie backdrop. Both presume that audiences can enjoy artworks only when they’re in the process of being ruined. And in the case of the Van Gogh experience, the market has proved them right: There are currently at least five different competing Van Gogh experiences touring the country. The copy has surpassed the original. This has remained a consistent theme throughout the history of Facebook, which offers a pale simulation of friendship and community in place of the real thing. Meta promises to lead us farther into the forest of illusions.

And yet the return to an art of dreaming and escapism is an enticing proposition. Rousseau, painting jungles in his studio in Paris beginning in his middle age, was escaping his own humdrum life as a retired municipal toll-service employee. He is said to have often told stories of his youthful adventures and how his tour of duty in Napoleon III’s intervention in Mexico had inspired his jungle pictures; but these were all lies. In reality he played in an infantry band and never once left France.

An important thing to remember about the metaverse is that none of this has been made, neither the jungle nor the technology to display it.

Rousseau found his actual inspiration in travel books and regular visits to the Jardin des Plantes, of which he once told an art critic, “When I go into the glass houses and I see the strange plants of exotic lands, it seems to me that I enter into a dream.” It was this uncanny dream space, where fierce animals have the quality of children’s book illustrations and bananas grow upside-down on the trees, that he conjured in his paintings; and it was the childlike originality and naïve purity of these depictions that his fellow artists would come to admire.

In late-19th and early-20th century Paris, Rousseau and his contemporaries (Paul Gauguin, Georges Seurat, Pablo Picasso, etc.) were busy inventing bohemian modernity, creating new ways of living and of seeing the world. In our century, that visionary role appears to have passed from the artists to the engineers, to Zuckerberg and his ilk. Who else tries to invent new universes? Who dares spin grand utopian fantasies? Artists don’t anymore. It’s Silicon Valley’s Promethean founders who try — and routinely fall short.

Meta’s offering is not an appealing one: It’s somehow both childish and cynical. But a vision of the future ideated by a creative agency for a megacorporation was always going to be dreadful. The problem is not that kids today cannot appreciate a Rousseau masterpiece, but that their elders, my generation, are unsure of how to come up with anything that might compare to it — we have forgotten how to imagine a different world entirely.

An important thing to remember about the metaverse is that none of this has been made, neither the jungle nor the technology to display it. You can’t really go to a museum and do this. It’s just an idea, a whisper on the wind. An ad about nothing. It’s Meta. The more times I watch the ad, and the keynote where Zuckerberg explains his vision in detail, the more it seems that he has no idea what he’s making or selling. That’s bad for a company but not for artists, who flourish with an open brief. Indeed, much of the keynote is a call for thousands of “creators” to help build a functioning metaverse and a promise that they’ll be paid to do so.

Contemporary art is currently dominated by painting and sculpture, by traditional materials and old ways of making. Companies outside of the art world, meanwhile, are using digital technology to remake timeless masterpieces as evanescent gimcracks, as projected tourist attractions and animations. But few artists are doing what Rousseau and his peers did: accepting the realities imposed by new technologies — in their case, photography — and breaking the old ways apart to create something new. An artist with the spirit of Rousseau might appreciate the potential of this new medium and want to make art for the metaverse and the wider public. Now, as in his day, he wouldn’t be remaking old works from the past but coming up with fantastical scenes from his dreams: sights he’d never witnessed in his own life, rendered in a style that nobody had ever seen. Today it feels possible, perhaps for the first time this century, to invent completely new aesthetics — so long as someone takes the reins from the technologists.

Dean Kissick is a writer and the New York editor of Spike Art Magazine. He last wrote for the magazine about the Pomodoro technique.

Sun Dec 5 , 2021
WASHINGTON, Dec 2 (Reuters) – President Joe Biden on Thursday laid out his strategy to fight the Omicron and Delta coronavirus variants over the winter, including free and insurer-funded at-home COVID-19 testing and new requirements for international travelers. The U.S. government will require private health insurers to reimburse their 150 […] 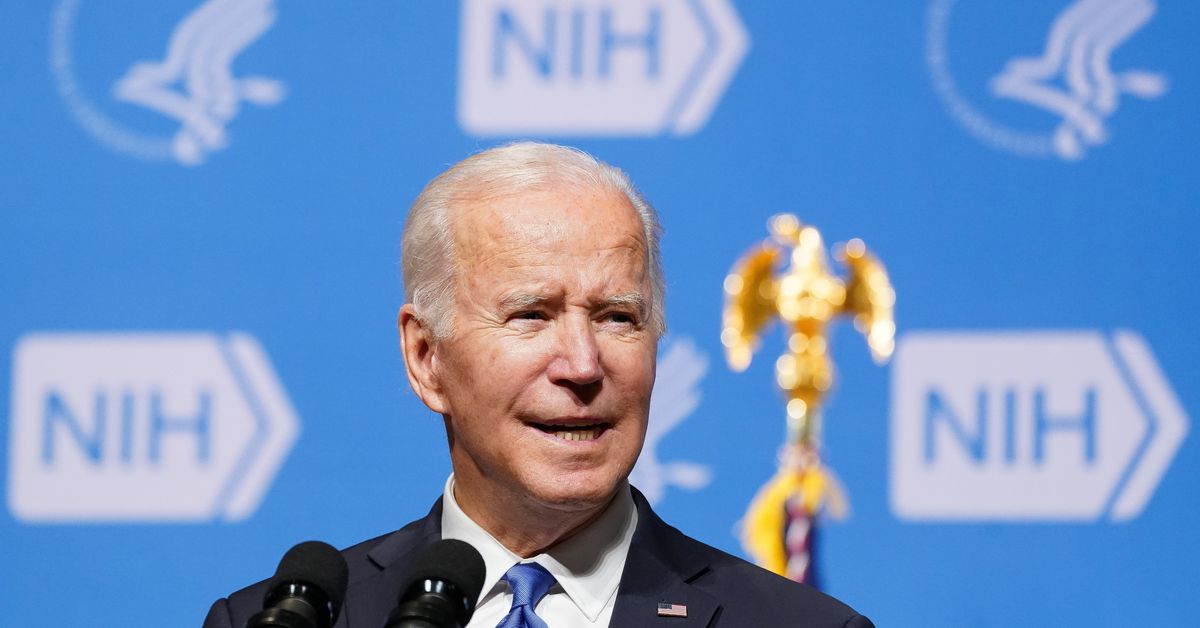